Over the last couple of weeks, we have been testing Title Update 10 on the PTS and your participation and feedback has helped shape the update immensely. We want to thank all of you for posting your thoughts on our forums, reddit, social media and on our official Discord server.

What is Title Update 10?

If you haven’t heard about Title Updates yet or just joined us in Washington D.C. and New York, we want to give you a short explanation of what a “TU” or Title Update is. These updates bring fresh content, game balance and bug fixes to the game and TU10 will be bringing three large bundles of content: Health, Season 2 and the new Raid, “Operation Iron Horse”.

All content coming with Title Update 10 will be available for all Warlords of New York owners. For The Division 2 players all relevant gameplay balance, loot and bug fix improvements will also be available, as well as the Level 30 version of the new Operation Iron Horse raid.

When can you access Title Update 10, Season 2 and when is Operation Iron Horse releasing?

Title Update 10 is scheduled to release on June 16th and at that time all gameplay balance changes, loot quality and generosity improvements will become available. Season 2 will start the following week, on June 23rd, introducing a new set of seasonal manhunt targets for you to track down and eliminate alongside a host of seasonal activities throughout the season. The pre-season week will allow you to get acquainted with the new changes before kicking off the new Manhunt and start progressing through the Season Levels. A dedicated article containing all the Season 2 details will be published closer to the start of the season, so keep an eye out on our social media channels!

Operation Iron Horse will launch late June, as we want to give players the chance to get raid-ready by gearing up, optimizing their builds and get some more SHD Levels. As we previously said, we think this time to prepare will be very helpful for players coming back with TU10 and allows an even playing field for everybody wanting to tackle the Raid. We will update you on the exact release timing of the Level 30 and 40 normal mode Raid in the coming weeks, as well as when you can expect the Discovery Mode for Operation Iron Horse.

We are very excited to bring Title Update 10 to you very soon. Until then, stay safe, Agents! See you in the streets Washington D.C. and New York City! 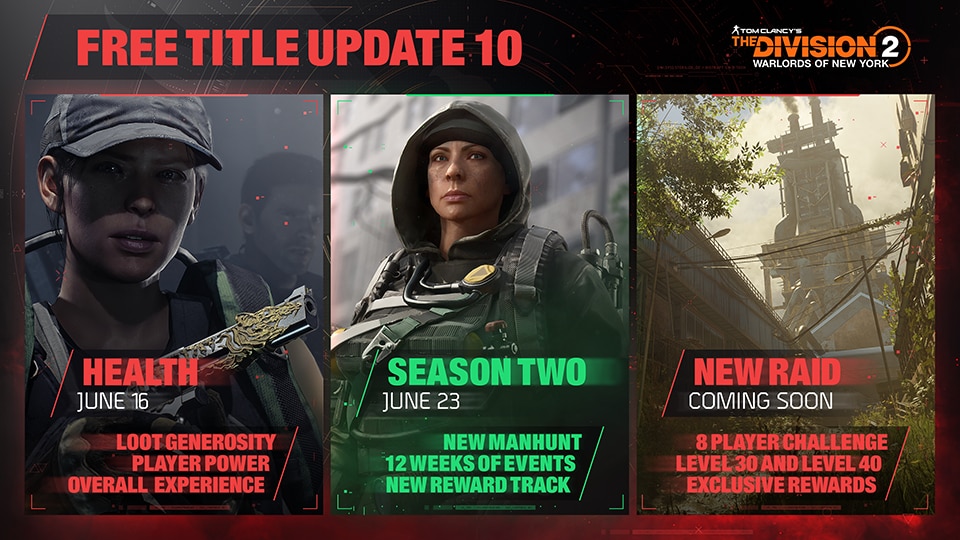