(the patch notes are further below due to formatting ssues) 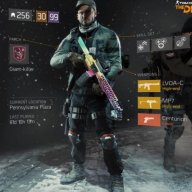 Except the formatting has not pasted very well. Maybe something in their html.

I think patch itself is available for download on ps4 consoles now.

The scheduled outage is for 4 hours too

And the link to the site with the formatting is below.

The following content, changes, and bug fixes are available free for everyone. Update 1.6 is available on February 28 for PC, PS4 and Xbox One.

Last Stand Gear Normalization
When entering a match of Last Stand, characters stats will be modified in order to bring a more stable balance to player versus player combat.

Other changes to stats:

With all these changes to Gear stats, here are the details of how existing gear should convert with this update.


[*]Skill Haste gear bonuses have been increased by 100%.

[*]The scavenger box in the Base of Operations will now properly scale with world tier.

[*]Exotic items sold at Vendors have had their prices slightly increased.

[*]Gear Set items have been lowered to be equivalent to High End prices.

FAMAS is now an Exotic weapon and Uncomplicated its unique talent. It has been renamed Bullfrog.

Its going to be a Looooonnnnnggggg night of recalibration.

Oh. daesu said:
Players can no longer “loot and kill” other downed players in PvE Survival.
Click to expand...

(plus recent recordings found in the Underground are hinting at this)